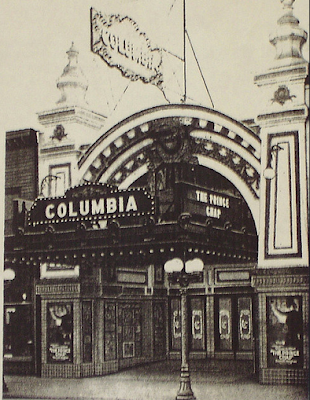 
In the first half of the 1900s, movies became the most popular and influential cultural medium in the United States. Thousands of movie theaters were built across the country, many of them as dream palaces, with ornate and lavish interiors. They provided a hardscrabble nation with a dream of glamour, romance, and adventure, and the ideals of success and equality. They were like secular churches where we all worshiped at the shrine of the American Dream.


In the last half the 1900s, restoring old movie theaters became a national cultural movement. To learn more about this preservation movement, look at Cinema Treasures, a non-profit website devoted to saving classic movie theaters. The site includes information about theater restorations, photographs, virtual tours, message boards, a chat room, and a listing of over 9200 hundred historic theaters. Portsmouth’s Columbia Theater should soon find a place on the Cinema Treasures website whose online address is http://www.cinematreasures.org/

Americans attended church at most once a week. But even relatively small towns had at least one enchanting movie theater where on average, two or three times a week, and especially on weekends, most of the town turned out to watch the steady stream of movies Hollywood produced. Those films were not considered works of art at the time, but neither were the plays of Shakespeare in Elizabethan England. Elizabethan plays were a popular form of entertainment that appealed to all social classes. But when Shakespeare wanted to write something his contemporaries considered high art, he wrote the long narrative poems about classical subjects – Venus and Adonis, The Rape of Lucrece, and the sonnets. Elizabethan theater was the television of its time: it was a form of popular entertainment, not high art. The English-speaking world eventually recognized the value of Elizabethan plays, and the Hollywood films of the 1930s through the 1960s are now appreciated for their artistic merit.

The restoration of old theaters is partly a recognition of the artistic quality of the entertainment they provided to ordinary Americans, in a sumptuous setting, at relatively low cost. The heart and soul of a community is reflected in its art; it just takes time for a community to recognize what is, or was, art. We usually only really appreciate something valuable after we have lost it. The movies were a glorious art form in which Americans once excelled. In particular, the Hollywood musical of the 30s and 40s and 50s was a celebration of American grace, energy and inventiveness. Think of the teenagers Mickey Rooney and Judy Garland putting together a really great show on a shoestring and a prayer.

In 1908, the Forrest, Nickleton, Orpheum, and Arcana were the first movie theaters built in the Portsmouth area, and the Columbia, Airdome, and Pastime followed in 1910. What’s in a name? Columbia was an early poetic name for the United States. The Brits had “Hail, Britannia!” We borrowed, the tune, added new words, and had “Hail, Columbia!,” our first national anthem. The Columbia is the only old Portsmouth movie theater still standing, and therefore it is one of city’s most important architectural and cultural treasures, Beginning as a music hall, the Columbia featured stage performances and silent movies. Based on the name of the silent film on the marquee, The Prince Chap, the old photograph of the Columbia shown above can be dated to 1916. In the middle of the 1920s the Columbia’s stage was enlarged to accommodate vaudeville acts and larger orchestras. Guy Lombardo and His Royal Canadians orchestra was the second act booked after the mid-twenties expansion. In 1929 the Columbia installed the equipment for sound movies, the first of which was The Jazz Singer, with Al Jolson. An American idiom had come into its own; Americans were considered worthy of making movies about, in contrast to The Prince Chap, which was about upper-class English society.

The difference between seeing a movie in a palatial theater in the past and in a multiplex matchbox in the present is the difference between a sit-down meal in a first-class restaurant and fast food at McDonald’s. In theaters like the Columbia, movie-going was a social and aesthetic experience. In theaters such as the Laroy, which was built on Gay Street in 1926, the dazzling interiors had time to work their magic on the viewer’s imagination, even before the lights went down and the projector started rolling. In a country of immigrants and nativists, the movies were the shared experience that helped forge a national identity. In a recent tour of the Columbia, which is so much larger inside than you would think from its entrance, I experienced feelings similar to those I had over thirty years ago standing in the cavernous Notre Dame cathedral, in Paris. For someone of my generation, especially for those from the working class, movie palaces are like secular churches. This is where we fell in love with the American Dream, with Rita Hayworth, with the future, with life.

By various accounts, the Laroy, built for movie and stage productions, was the most impressive of Portsmouth’s theaters. It was torn down in 1973 to widen Gay Street. Imagine London tearing down the Globe to widen a street, as if progress was defined by the degree a society accommodates itself to vehicular traffic. All the other Portsmouth movie theaters, with the exception of the Columbia, have been demolished. The survival of the Columbia may have been a fluke. Because of the chronically depressed economy, it just didn’t pay to tear it down, even for another parking lot.

About three years ago, Lee Scott, a local entrepreneur, a very rare bird in Portsmouth, decided that he would rescue the Columbia from the wrecking ball and oblivion, but he soon found that he not only would not get any help from the city but that roadblocks would be thrown in his way. When Scott risked so much of his own time and money to restore the theater, the Chamber of Commerce locals must have thought he had a screw loose. How could anyone undertake such a project without a feeding tube connecting it to public funds? Didn’t he realize that the way to succeed in Portsmouth was to find a place for himself at the public trough?

In a letter he sent to all Portsmouth residents, dated June 14, 2004, then-mayor Bauer wrote, Scott “cannot obtain credit, financing or insurance for his renovation project as a result of decisions he made in his past.” Bauer spelled out what he meant by “decisions he made in the past” by calling Scott “a convicted felon who served multiple jail sentences for many crimes in the 1980s.”

The important difference between Scott and Bauer is not that Scott was convicted and Bauer was unindicted, or that Scott served his time and Bauer did not. The important difference between them is that Scott became a legitimate businessman and succeeded while Bauer was a failure, first in business and then politics. The reason Scott could not get credit, financing, or insurance was not that he was an ex-convict but that those who control the economy and city government of Portsmouth were determined that the renovation of the Columbia would fail. Scott is not done yet, and maybe the Columbia will fail, but based on what I’ve seen so far, I would bet the Columbia will rise again because he is extraordinarily persistent, as an entrepreneur should be.

In 2002, J. W. Kelley, a Portsmouth resident, wrote a letter to an online magazine Preservation. The heading of the letter was “An Ohio Town’s ‘Apathy.’” (Click on the link below to read the letter.)
http://www.nationaltrust.org/magazine/archives/arc_911/051402.htm

Kelley included photographs of two historic architectural landmarks: one of them was the Columbia. Here is what Kelley wrote about it: “The level of apathy toward historic buildings here is pathetic. We have one of the few surviving Columbia theaters, built in 1911. You would think that one of our wealthy residents would want to preserve this piece of history. Wrong. After it closed in the 1980s, it was empty until a Columbus businessman bought it last year. He is fully restoring it, and plans to use it as a live-music venue, but no one—not the mayor, the city council, or any of the many wealthy residents of our area—is lifting a finger to help.” What to Mr. Kelley a few years ago appeared to be apathy today looks much more like antipathy. But I think we are going to have a Hollywood ending, and the bad guys, the unindicted, are not going to do in the good guy. I hope to see a historic old flick in the restored theater. Hail, Columbia!

(For the words and music of “Hail, Columbia!” click on the following link:
http://www.niehs.nih.gov/kids/lyrics/hailcolumbia.htm